Ever wonder how the Pro's make the tennis forehand look so easy and can hit the ball so hard? Let's breakdown Novak Djokovic's tennis forehand to see the intricacies of this groundstroke.

Preparing to receive the ball. Novak takes a split step, which many great players do. As he starts to take the racket back, he rotates his shoulders hips and trunk, which is crucial for force production. This will allow him to store kinetic energy that he will later use to help generate power and racket head speed.

His non- dominant hand lets go of the racket and begins the downward swing. The racket will drop from a high to low position.

He steps forward and the racket head begins to drop. The non-dominant hand begins to clear away. The racket face is now facing down to the court.

As he continues to turn the hips and shoulders open, his racket lags behind him staying in the same place (racket lag), which allows him to generate a high racket head speed.

The racket now comes forward and he strikes the ball in front of his body. He is using all that stored kinetic energy as he pushes off the back leg. His is able to generate a high racket head speed because he turned his hips and shoulders so well in the lead up to strike the ball and he uses the energy stored from the back leg.

His racket begins to close after ball strike. The racket face is pointing down.

He completes the forehand by finishing over his shoulder. He is now ready to get into position to receive the ball.

I hope you were able to pick up a few good tips about the tennis forehand. Thank you to www.hugetennis.com for the photos.

Running With A Stroller 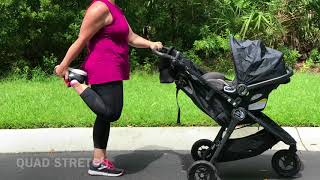 Running With A Stroller 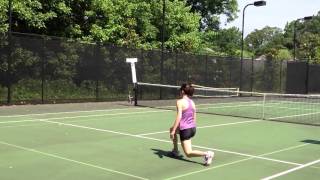 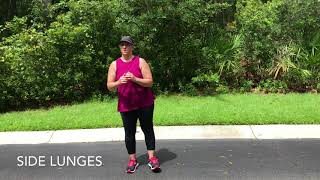 Oh Baby! What Happened To My Body!